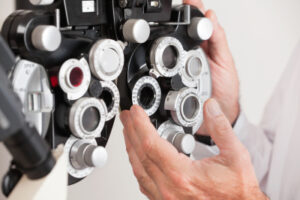 Another Elmiron Lawsuit was recently filed on behalf of a New York woman who suffered unexpected vision impairment after taking the bladder pain drug. The lawsuit alleges the drug manufacturer withheld information from users and the medical community about the risk of permanent retinal damage associated with the interstitial cystitis treatment.

The lawsuit filed in the U.S. District Court for the Western District of New York on January 7th, alleges Johnson & Johnson and its Janssen Pharmaceuticals subsidiary failed to adequately investigate the threat Elmiron poses to vision, or warn about the risk users may be left with an irreversible retinal injury and vision impairment.

Despite Elmiron being on the market since 1996, no warnings were ever provided about the toxic effects the painful bladder drug may have on the retina until June 2020, leaving many doctors unaware the medication was causing users to experience a variety of complications, including difficulty adjusting to dark light, trouble reading, centralized dark spots and complete blindness. As a result, neither urologists prescribing the medication nor ophthalmologists treating the symptoms were aware of the negative long term side effects the drug posed and continued to prescribe it.

It wasn’t until 2018 that a study published by the Journal of Ophthalmology showed a link between Elmiron (pentosan polysulfate sodium or PPS) and pigmentary maculopathy. This was followed up by a later study published in July 2019 by the Review of Ophthalmology. It too showed Elmiron use related to maculopathy. These studies prompted the FDA to update the Elmiron Warning Label in June 2020, which now advises that users may face a risk of retinal pigmentary changes and urges doctors to closely monitor vision while taking Elmiron.

This latest lawsuit joins a growing number of Elmiron Lawsuits that are now being pursued throughout the United States. These cases were recently centralized for pretrial proceedings before one judge in the U.S. District Court for the District of New Jersey, where there are currently about 100 cases pending. However, as Elmiron lawyers continue to review and file claims in the coming months and years, it is expected several hundred, if not thousands, of similar complaints may be brought on behalf of former users nationwide.

Elmiron use led to unexpected side effect of permanent blurred cloudy vision. Find Out If You Have A Case