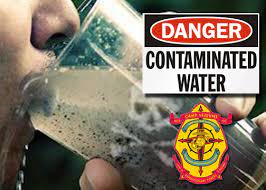 High concentrations of toxic chemical solvents were discovered in Camp Lejeune’s drinking water, This information, however, was not disclosed to the public until two decades after it was discovered

According to a recent estimate, as many as 500,000 people over a thirty year period were exposed to these toxins while living or working at the North Carolina U.S. Marine training facility.

Anyone who was exposed to the toxic water for a minimum of 30 days during a period spanning August 1, 1953 to December 31, 1987  and has experienced health issues is eligible for compensation.

The Camp Lejeune Justice Act was passed in the House on March 3, 2022, with bipartisan support. It now awaits Senate approval.

If the Camp Lejeune Justice Act of 2022 is approved by the Senate, the legislation will allow those who have experienced health issues as a result of on-base water contamination to pursue litigation.

The bill was put forward within the Honoring our PACT Act of 2021, which is a more expansive act improving benefits for veterans that have been exposed to toxins.

The Camp Lejeune Justice Act passed the House in a 256-174 vote. A total of 222 Democrats and 34 Republicans were voted in favor of the act.

“Anybody who served in the United States Marine Corps, and went for combat training, probably went to Camp Lejeune in North Carolina,” Rep. Cartwright told The Hill, “So this is not just a North Carolina issue; it’s a national issue,” he stated, noting the widespread effects of the tainted water at Camp Lejeune, and the national importance of water contamination on military installations.

Currently, the larger PACT Act continues to stall in the Senate. Reportedly, the bill was initially passed in both the House and the Senate. However, a small clerical error sent the bill back to the House. Now, members of the Senate have objected to minor issues of the bill, reports Precision: PR Newswire. Activists have urged the Senate to pass the PACT Act as quickly as possible, in the interest of getting help to the veterans exposed to toxic chemicals in the course of their military service. Proponents of the bill say that delaying its passage could risk the lives of millions of veterans exposed to toxins at Camp Lejeune and other military sites.

Pending legislation seeks to compensate anyone who has suffered as a result of drinking contaminated water at Camp Lejeune. Find Out If You Have A Case