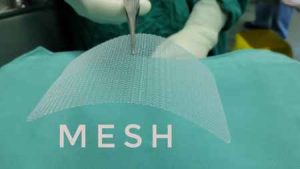 A number of different types of hernia mesh made by various manufacturers have been associated with design defects that could cause severe and life-threatening complications after hernia surgery.

FIND OUT IF YOU HAVE A HERNIA PATCH LAWSUIT: Thousands of hernia mesh lawsuits have been filed in recent years as a result of problems with the Ethcion Physiomesh, Atrium C-Qur, Alloderm, and Kugel Patch.

OVERVIEW:  Manufacturers of hernia repair mesh have an obligation to adequately research their products and warn about risks associated with their device. In recent years, a number of specific hernia mesh products have been linked to high rates of complications, including:

In many cases, it appears the manufacturers knew or were warned about these problems before the patches hit the market, and financial compensation may be available for individuals who have experienced complications after hernia repair surgery.

Some of the hernia products that have been linked to complications include:

Ethicon Physiomesh: An Ethicon Physiomesh recall was issued in May 2016, removing the product from the market worldwide amid a large number of failures and revision surgeries. Although the FDA classified the action as a “market withdrawal” in the United States, several foreign regulatory agencies have classified the action as a hernia mesh recall, and Ethicon has required all unused inventory to be returned and does not intend to begin selling the product again since it was unable to identify the cause of the problems associated with the controversial hernia mesh. The lawsuits were consolidated for pretrial proceedings as mart of an MDL, or multidistrict litigation, in May 2017.

Atrium C-Qur Mesh: Pronounced “secure”, C-qur is a polypropylene mesh that is covered in a gel made from omega 3 fatty acids and triglycerides. It has been linked to a number of adverse events and complications, including claims that it causes friction with the underlying tissue. In October 2012, the FDA issued a warning letter to Atrium, citing the company for failing to respond to complaints about the C-QUR mesh and other products. The FDA accused the company of failing to review or investigate any complaints involving C-QUR failures or infections. The lawsuits were consolidated for pretrial proceedings as part of an MDL, or multidistrict litigation, in December 2016.

Kugel Hernia Mesh Patches: Recalls have been issued for a variety of different Kugel hernia products used for repair of ventral or incisional hernias, which may develop at the site of prior surgical scars. The Kugel Patch contains a memory recoil ring around the perimeter of the mesh, which allows the doctor to fold it during the hernia repair. It is designed to spring open once in place to lay flat. However, design defects may cause the plastic ring to break, resulting in serious internal injury. A number of Kugel hernia mesh settlements have been reached in recent years.

AlloDerm Regenerative Tissue Matrix: Alloderm is a hernia repair and abdominal reconstructive surgery patch, which is manufactured from tissue harvested from human cadavers. The manufacturer then aseptically processes the tissue to remove the cells and epidermis, and freeze-dries it to remove some of its elasticity, leaving a white, fibrous patch.

When used as a hernia repair patch, Alloderm has been linked to problems due to the manufacturer’s initial failure to warn physicians about the importance of pre-stretching the product, which can expand after it is implanted, causing a number of painful and debilitating complications.

Problems with hernia repair mesh products now under review. Find Out If You Have A Case