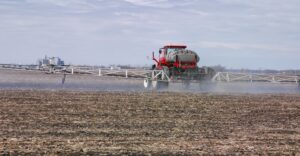 An Arizona man has file a product liability lawsuit against Syngenta and Chevron claiming they failed to protect agricultural workers from Paraquat toxicity, which led to his development of Parkinson‚Äôs disease.

The complaint in the U.S. District Court for the Southern District of Illinois on December 28, claiming that users of the herbicide were not provided adequate directions or warnings about the potential side effects.

Paraquat has been widely used on farms throughout the United States since the mid-1960s, to control weeds and long grass.. A growing body of research has established that Paraquat is toxic and may cause Parkinson‚Äôs disease diagnoses among farmers and others in the agricultural industry – even when all of the manufacturer‚Äôs recommended safety precautions were followed.

According to the lawsuit, Thomas Quaka was repeatedly exposed to Paraquat while spraying the weed killer on 500 acres of farm fields in Illinois from 1964 to 1973. He was diagnosed with Parkinson‚Äôs disease in 2020.

The case joins dozens of similar¬ÝParaquat toxicity lawsuits¬Ýnow filed in courts throughout the U.S., each raising similar allegations that the manufacturers withheld information about the risk of Parkinson‚Äôs disease that may result from mixing, spraying, handling or even being in proximity to the herbicide.

While genetics are often believed to be a major cause of Parkinson‚Äôs disease, growing research indicates genes are only associated with about one-in-ten cases. Exposure to herbicides and pesticides are increasingly considered a leading risk, especially when combined with other factors that place individuals at risk of the development of Parkinson‚Äôs.

Given common questions of fact and law raised in complaints filed throughout the U.S., the federal¬ÝParaquat litigation has been centralized¬Ýbefore one judge for coordinated discovery and pretrial proceedings.

As part of the coordinated federal litigation, a federal judge has indicated that a series of ‚Äúbellwether‚Äù trials will be held to help the parties gauge how juries are likely to respond to certain evidence and testimony that will be repeated throughout the claims. However, if Paraquat settlements or another resolution for the litigation is not reached, each individual case may later be returned to the home district where it was originally filed for a future trial.

Exposure to Paraquat has shown to increase the risk of Parkinson's Disease and other neurogenic disorders. Find Out If You Have A Case