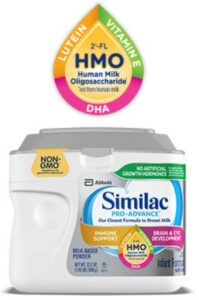 Abbott Laboratories is facing increasing scrutiny from federal regulators, lawmakers and parents, as new information is emerging that its powdered infant formula products sold under the Similac brand, contain harmful heavy metals known to cause autism, severe attention-deficit/hyperactivity disorder (ADHD) and/or brain development issues. As such these products pose a long-term health risk to humans and particularly to infants for whom these products are intended.

In order to justify a premium price for its infant formula products, Abbott emphasizes on its packaging that Similac products are made with healthy, nutritious and superior ingredients and not with detrimental genetically engineered ingredients. Yet nowhere on Abbott’s packaging does it disclose that Similac products also contains toxic heavy metals including lead, arsenic, cadmium, and mercury.

Abbott’s marketing omissions put profit before safety and allowed it to capitalize on and reap enormous profits from consumers who were misled to believe that its products were safe.

This class action seeks damages against Abbott for its deceptive marketing and fraudulent failure to disclose relevant facts to the consumer public and to reimburse its customers for the premium charged for its products.

This action is open to anyone who has purchased any of the below referenced products on or after March 1, 2016.

Products Included In This Lawsuit

Recent testing conducted on three of the Similac Infant Formulas confirmed the presence of Heavy Metals, to include:

Indepenent testing also confirmed the presence of two Heavy metals in another of Abbott’s products:

Similac powdered infant formula found to contain toxic heavy metals and poses significant long-term health risk. Find Out If You Have A Case