Rust-Oleum Corporation has again been hit with a class action lawsuit by consumers who claim that its’ deck coating products are defective and prone to failure. The products are marketed as – 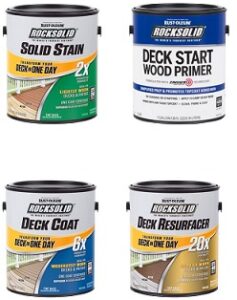 At issue is the Rock Solid line of products fail to adequately adhere to the underlying surface. As a consequence these products prematurely degrade, chip, peel, flake, strip, and otherwise deteriorate a surface.

Rather than providing years of protection, these deck products deteriorate in a short time period. Consumers soon discover that peeling and failure require removal and replacement of the product coat in its entirety and often replacement of the underlying deck itself. Thus, instead of ending the cycle of repainting and replacing, Rust-Oleum deck products actually hasten it.

The various product failures experienced by consumers who purchased Rust-Oleum Products are at odds with Rust-Oleum’s marketing, including promises and representations it makes regarding product quality and performance directly on the product label.

Rust-Oleum knew or should have known of the deficiencies of its Rock Solid product line and that its marketing label was deceptive. Indeed, this is not the first time Rust-Oleum has been sued regarding the defective nature and inferiority of its Restore brand. Different products marketed and sold by Rust-Oleum under the “Restore” brand were previously the subject of a well-known class action lawsuit that asserted similar allegations regarding product failures of the Restore products. That class action settled in 2016.

If you purchased and used any Rust-Oleum Rock Solid Product you may be eligible for compensation. There is no cost or expense to you.

Rust-Oleum's Rock Solid Deck products ruin decks, promote a higher maintenance cycle and promote costly repairs or replacements. Find Out If You Have A Case